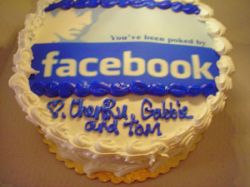 Day-in, day-out, we get inundated with news around here about every website and company under the sun. Launches, re-launches, “we changed the color of our banner!”, we hear it all. But, some companies are worse than others: everything they do, every little insignificant change they make, and the entire blogosphere is writing about it like there’s no tomorrow. And, of course, we do, too. So, ladies and gents, here you go, the five websites even WE are tired of discussing.

Facebook - You heard me… Facebook. I don’t care if everyone loves it, and we’re all spending our entire day on it, there is a point where we just go a little nuts with the coverage. How about the removal of the word “is” from the status message? We covered this not just once, but twice! Yes, it was silly the word was ever there, and I’m glad it’s gone… but is it news? Yes, we wrote the stories, we’re guilty, but hopefully going forward everything Facebook does will be “news” worthy.

Google - Oh, Google. It was cute for those first couple years when you were gaining ground on “the man”, but now… now I can’t read a newspaper, turn on the TV, listen to the radio, there is nothing I can do without hearing your name. I keep waiting to find you in the grocery store with your new breakfast cereal, “Google O’s!”, but thankfully that hasn’t happened yet. Maybe it wouldn’t be so bad if every media outlet didn’t announce every little move you make. Sure, you now love my BlackBerry a bit more, but did you have to get in to two news cycles with that bit of info? Could I go one day without hearing your name in any way? Oh what a glorious day that would be… imagine a day where no one says “I’ll Google you”. Oh what a lovely day that would be.

Hulu - Sure there are some awesome shows to watch on Hulu, but the coverage was all a bit much. From the moment they named themselves, to only 30% of people care about them going high-def, this is another one of those sites people just can’t seem to get enough of it. Personally, I think NBC left iTunes so that they could start three video sites an make sure they were in the news as many days as possible. If we’re not covering Hulu, we’re covering NBC Direct, and if all else fails, we can now cover them on SanDisk’s download service. It’s all an evil plot, or, NBC has no blasted idea what they’re doing… your choice.

Joost - It’s cool, and you can watch nifty videos on it, but do we really need to cover every aspect of it? Joost signs a deal for independent films, Joost signs 31 advertisers, Joost adds Indy Racing content, Joost sends out for cappuccinos, Joost employees install new bottle on the water cooler… is there anything about Joost we don’t know yet? Part of the problem for this one is that we heard so much about it that by the time it launched, we expected it to wash our pets for us and get stains out of rugs, but, sadly, it’s just another in a long line of video sites.

YouTube - Are you noticing a video trend here? Online videos are cool, and sure we all enjoy them from time-to-time, but isn’t there more to the web than online videos? Yes, we’ve all enjoyed the dramatic “chipmunk” (it’s a prairie dog), but the next time we hear “Could this be the YouTube killer?”, I may scream. How about instead of focusing on killing YouTube, you instead focus on being the best site you can and not worry about what everyone else is doing? If you provide good, strong content, success will come. How do you think Google nibbled away at Yahoo? By being the best Google they could be, not the best Yahoo-killer.

So, what sites make your skin crawl when you see their name for the 50th time in a week?