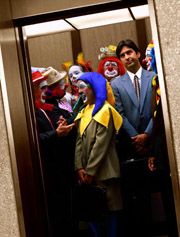 Element 1 : A Friendly Place
It may sound trite, but friendliness appears to be one of the distinguishing characteristics of good workplaces. People seem to enjoy each other's company. This is not an insignificant issue. Work for an organization is, after all, work in a group setting. It's very different, for instance, from the mostly solitary work of a novelist or a painter. When you work for an organization, other people don't disappear. You are forced to interact with others, with your co-workers and your boss or your subordinates. What you think about your workplace has to do largely with the quality of those interactions.

There Isn't Much Politics Around Here
An atmosphere of mutual respect also affects how people han¬dle power struggles endemic to every human organization. In the workplace, people compete over promotions, choice assignments, and recognition, among other things. Competition can be healthy for both the individuals and the organization— but only if, to use a sports metaphor, the playing field is level. The field tilts when employers tolerate favoritism or practice outright discrimination against people because of sex, age, sexual preference, nationality, religion, etc. But even when the field is level, subverting others is the way to get ahead in some organizations, making employees feel there are no rules or referees.

At good workplaces, employees don't seem concerned about backstabbing. It's in this context that one expression heard repeatedly at good workplaces takes on meaning: "There isn't much politics around here." By that, people mean employees aren't constantly jockeying for position, trying to curry favor with the high-ups, worrying about the impact of their actions on their chances for moving up in the company, or looking over their shoulder to make sure someone else isn't setting them up to destroy their career.

You Get a Fair Shake
Good workplaces offer a dramatic contrast to business as usual in America, where being fair to employees is considered optional. Few non-unionized firms, for instance, have even an elementary grievance procedure that offers any protections. And even strong union grievance procedures only seem to moderate the worst abuses. They don't create an atmosphere of fairness. It may be nice to run a company that values fairness, the argument goes, but what does it have to do with making money? Employees at good workplaces consistently, and often without being asked, make remarks like: "They treat us fairly here," or "The company doesn't take advantage of you," or "You get a fair shake around here."

Such statements must be taken seriously. It's extremely difficult to fool people into believing they are being treated fairly when they're not. Most of us, especially in workplace situa¬tions, have a highly trained sense of injustice. We carefully note examples of favoritism, bias, inequity, and abuse, even if we don't express our outrage. So we don't gratuitously say something is fair when we know it's not. We normally offer that judgment sparingly, and only when it's genuinely deserved.

Feel Like Family
Just what is meant by family? Of course, there are families and then there are families. Some have loving parents, while others have wife beaters and child abusers. So to suggest that a company is like a family may suggest widely different inter¬pretations. Generally speaking, people who work for good em¬ployers mean something very positive when they say their workplaces have a familylike atmosphere. Among other things, they mean:

1. A caring, nurturing environment: Employees at good workplaces talk about how supervisors take an interest in their personal lives. People talk a lot about how they feel valued as individuals, not just as part of an undifferentiated mass that performs tasks for the organization. This also applies to the relationships between workers. There is a pervasive feeling that your personal concerns are important to others in the organization.

2. A long-term commitment: You're in a family for life. You can't leave at will. By the same token, people at good workplaces often remark that they feel they have made a lifelong career commitment to the organization. Good employers recognize and appreciate that commitment.

3. We're all in it together: One of the best things about being part of a family is that it's assumed that everyone can play a distinct and valuable role. Part of the reason for this attitude has been that families have historically been economic units in which members pool their resources to sustain one another. Within the family, there's a feeling that everybody is "in it together." Family members are supposed to unite when confronting outsiders. Within an organization, this feeling does more than engender camaraderie. It also helps the organization achieve its goals more effectively. This is one factor that explains why good employers tend to be more productive and profitable than their competitors.
Источник: itblogs.ru
{{ rating.votes_against }} {{ rating.rating }} {{ rating.votes_for }}