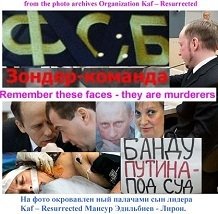 Mansour Edilbiev - Liron, son of opposition writers, journalists and bloggers has been kidnapped in a secret torture chamber executioners FSB (Deputy head of the investigation department of the FSB Slutsky, investigators Investigation Department of Russian Federation Stanislav Ponomarev, Smolyakov and other scum) on the personal instructions of the mega-thief and Director FSB Bortnikova in a combination of the criminals were Edilbieva - Liron tortured, insulting words "Jewish bastard" and on the personal instructions Bortnikova President of the Court of Moscow sentenced Mansour Edilbieva Egorova - Liron on trumped Bortnikova, Slutsky Smoliakova and Ponomariov and other scum of the criminal case Gulag for 16 years . Justification KGB RUSSIAN FAMILY Bortnikova 10 times less than in the days of Stalin and Beria, Yezhov Opinion creative core Брейвик подтвердил, что чекисты серийные убийцы, а в России профашистский режим Organization Kaf – Resurrected from the column «FSB - a bunch of serial killers, Russia - planetary center of terrorism» Breivik has confirmed that the fascist regime in Russia and the KGB assassin serynye SPECIAL EXTRA: Breivik, Norwegian Mass Killer, Adores PutinPosted on July 24, 2011 | 150 Comments “Putin seems to be a fair and resolute leader, worthy of respect.” Those are the words of Norwegian madman Anders Behring Breivik, killer of nearly 100 defenseless children, in his Internet manifesto. Breivik interviewed himself and then published the results.  Here is the Q&A in full: QUESTION: Name one living person you want to meet? ANSWER: The Pope or Vladimir Putin. Putin seems like a fair and resolute leader worthy of respect. I’m not sure at this point if he has the potential to be our best friend or our worst enemy. He is very difficult to psychoanalyze. I would not want to be his enemy, that’s for sure. Obviously, he will have to condemn this [attack]. It’s understandable. Breivik is also a big fan of Nashi, Putin’s Hitlerian youth cult. Serial killers worship Vladimir Putin. Need we say more? http://larussophobe.wordpress.com/2011/07/24/special-extra-breivik-norwegian-mass-killer-adores-putin/